Cupcake Decorating on a Cruise? 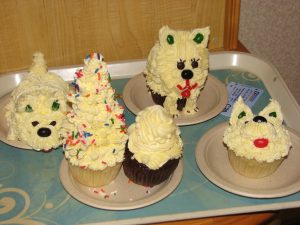 When my youngest daughter and I went on the Royal Caribbean Liberty of the Seas, we stopped in the cupcake shop to see what they had. What I didn’t expect was a class on decorating cupcakes. There were two different classes available, one for children and one for adults (and teens). The children had frosted cupcakes they decorated with various candies and fondant cut-outs to make very cute little animal faces. The adult class was a bit more difficult, making several different dog cupcakes and a Christmas tree cupcake. 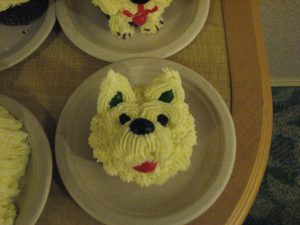 The cost is $30 per person (child or adult). However, you get to keep (and eat) all the cupcakes you decorate. That’s six per person. That is a deal considering what is charged for them in the shop.

Anyway, here is a sampling of the cupcakes we decorated when we took the class. If I can get the same results again, I don’t know, but I think I did pretty good, considering I’m not that good at artsy stuff.

The classes are only offered on days at sea, so it gives you another option for something to do. We did it our first full day of the cruise. Since it was just the two of us, and we had seven cupcakes each (two of them have two cupcakes to make the one item), there was no way we would be able to eat them all. So, we decided to share them with others. We shared one with our stateroom steward and the others with the teen group (since my daughter participated in the group). 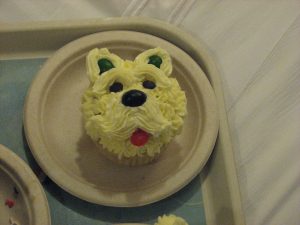 As we carried them from the cupcake shop and onto the elevator and through the halls, we got lots of compliments. Some asked where we got them, and we told them about the class. Who knows, maybe some of them decided to take the class after seeing them. It wasn’t really as difficult as I thought.

By the way, everyone thought that Christmas tree cupcake had a lot of frosting on it. It isn’t as much as you may think, because there is an ice cream cone under that frosting.