It’s always sad when you hit the mark of being half way finished with something you are enjoying so much. That’s how I felt today. It was Day 4. But I got over it quickly. Today was the Castaway Cay day and that meant I would have a lot of the ship to myself! I am not a beach person. I don’t like to get into the water and I don’t like getting dirty in the sand. But I like the day we go to Castaway Cay, because almost everyone gets off the ship, including much of the ship staff. This is the day I can handle anything I want at Customer Service without waiting! Since I had some Disney Gift Cards, I wanted to put them on our account to lessen the amount that would be charged to our credit card.

Anyway, it started with breakfast at Cabanas again. Then we went back to the stateroom where my husband got his swim trunks on and packed up what he wanted to take ashore. He loves the beach! We also scheduled a bike rental for him so he could go around the island on the trails. He enjoyed the bike ride and also the beach time. He had lunch on the island, too. He really enjoyed the food, as most others do, too. It is all grilled and since there are burgers, kids will enjoy it, too. Soft drinks are also included at the beverage station on the island.

While Wayne was on the island, I did some work then went to customer service and handled what I needed to do.

I went to the pool deck and read a bit then decided it was getting close to lunch time and went back to drop off my tablet.

I then headed to lunch and ran into the cruise director and had a little chat. He told me there were 78 passengers on the ship at that time. I also told him that my husband and I were wanting to say “hi” to Anthony Youngblut, who was the assistant cruise director. He was on the Disney Dream when we were on that cruise and we really enjoyed the morning show. He had laryngitis part of that trip and it was fun as the cruise director could say all sorts of things about him and he couldn’t defend himself. He took it all with good fun. When we saw him running around on the ship later, we chatted with him about the show and how much we enjoyed it. Anyway, we told the cruise director to tell him that he had a fan club. Maybe just a fan club of two, but fans nonetheless.

In Cabanas there were very few people. It seemed there were more of the ship’s staff than passengers. They close off half of Cabanas when at Castaway Cay, since there are so few people to serve at lunch. The food, however, was still just as plentiful and tasty as at other times.

I decided to do a little more work and then some reading, but by the time I was almost finished with my work, my husband told me he was heading back to the ship. While he showered I did some reading. We decide to stay in our room until we went to the show or movie. The movie was being shown in both theaters, so it didn’t matter where we went to see it. We decided to go to the movie theater, since it was just steps away from our stateroom. In hindsight, we should have gone to the other theater. It was PACKED with families who had young children. I believe they had the early dinner seating, but wanted to see the movie. Since their children probably wouldn’t stay awake for the movie for the late show, they were in there with plates piled high with food from the counter service venues. They were eating dinner while watching the movie. Oh, well. They were quiet during the movie. 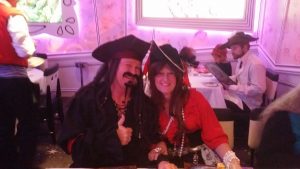 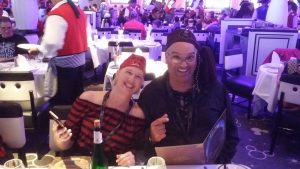 Since tonight was Pirate night, the party was between the shows and dinners. This meant a party on the pool deck with fireworks topping it off. We went to a part of the ship away from the party (who can hear what’s going on anyway) so we could sit and watch the fireworks from a better angle. We then headed to dinner. 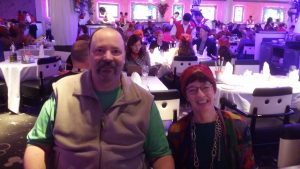 Just so you know, Pirate Night is a BIG deal. The servers are all decked out in pirate garb and a lot of the guests are as well. To get you in the mood, a pirate bandanna is left in your stateroom so you can at least wear that. My husband, who dressed as a pirate for our Vacation Bible School at our church, decided NOT to bring his outfit. Too bad, he would have fit right in. One of the couples got on him about not bringing it, since he really would have fit in.

Again, another delightful dinner with the pirate menu! Then after chatting, we decided to turn in.