This particular trip in December 2002 was a real challenge. Our 14-month-old daughter would be very excited when she saw the characters far away, but when they came up to us, she would start to scream! They were bigger than life! This wasn’t fun for our older children, but they understood. I also believe that our Opal had nightmares about the characters, because when we would be at a character meal, that night she would wake up screaming. We made sure to hold her extra to let her know we were there and she didn’t have to be afraid. Wayne would take her for a ride in the car, which helped calm her down and put her back to sleep. 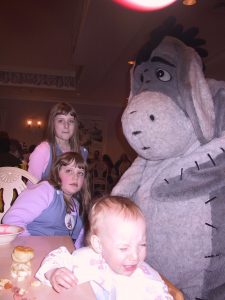 She didn’t have a problem with the face characters, you know, those like Cinderella, who didn’t have those huge costumes.

I recommend that if you have a young child, you be very careful. First, see how they react when they are far away from the characters. If you can tell they are a bit apprehensive, be prepared for the screaming. If they are excited, they may accept them, but then again, remember, your child won’t see how large they are until closer. If you know your child will react (because they have already done so), and you are at a character meal, let your server know. If you have older children who want to see the characters, seat them far away from your youngster who needs to avoid them. Make sure one parent gets the other children up right away, and keep them as far away as you can. Let the character know that the other child is afraid and to avoid them. Then have the other parent try to keep the frightened child occupied with something – food, an activity, whatever. I know you’ll miss some of those exciting memories with the other children, but sometimes a parent has to sacrifice. Parents can switch tasks from time to time, too, so you can alternate who deals with the frightened child and who helps the other children with the character.

The first time we went to Walt Disney World, our oldest had just turned two. She didn’t have any problem with the characters, so remember, every child will be different.

Our other children at this time were 11, 9, and one was turning 8 when we were there. My mother-in-law, Goldie, also joined us.

Now Opal did have fun with the other things we did, but those characters were something, as far as she was concerned, that she could do without. 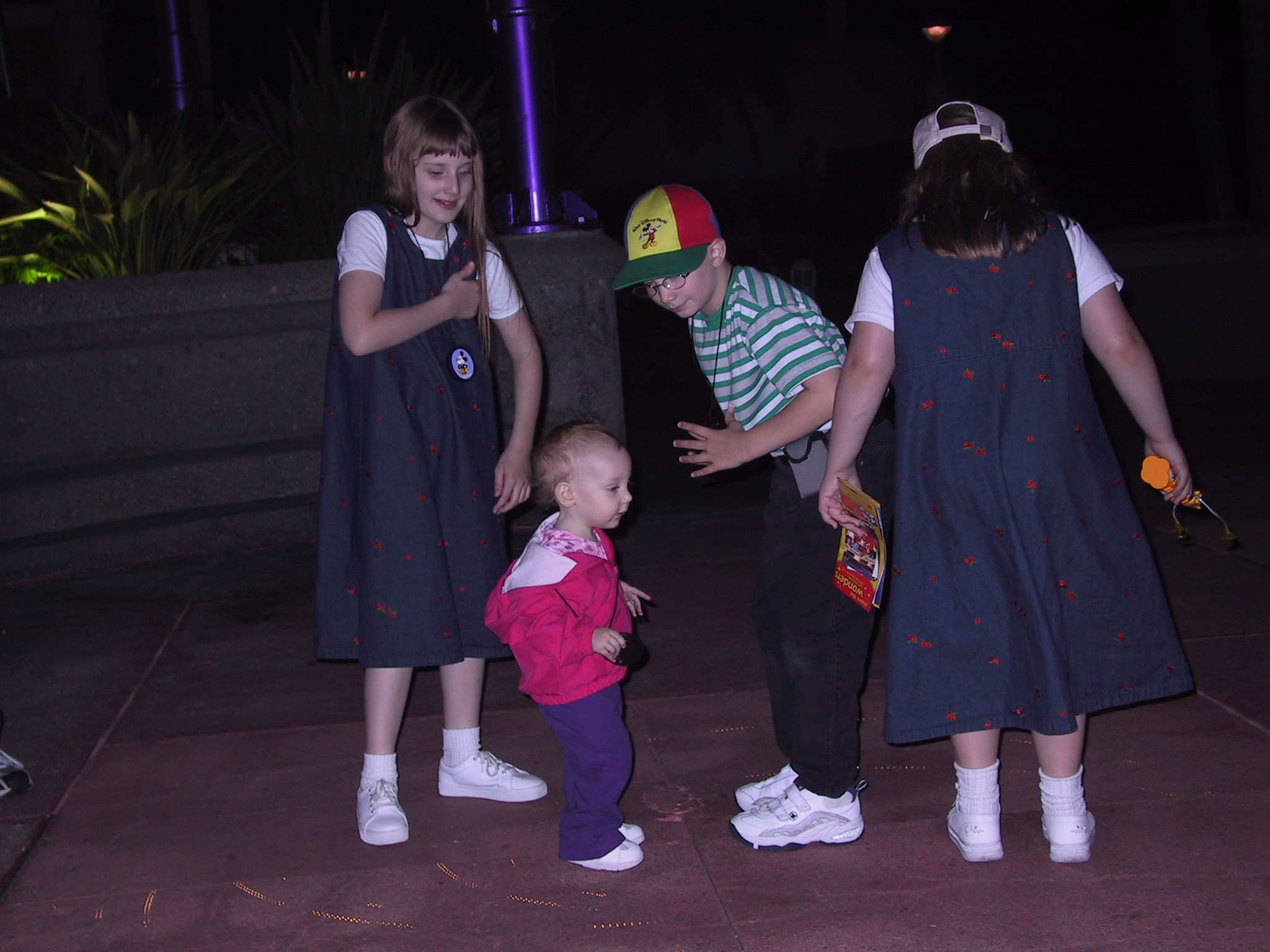 For some reason, children love the lights in the sidewalk at Epcot. During the day, you can’t even tell there’s anything in the sidewalk, but at night, they are an attraction in and of themselves. They loved to stomp on the lights as they appeared. Even Opal enjoyed them. 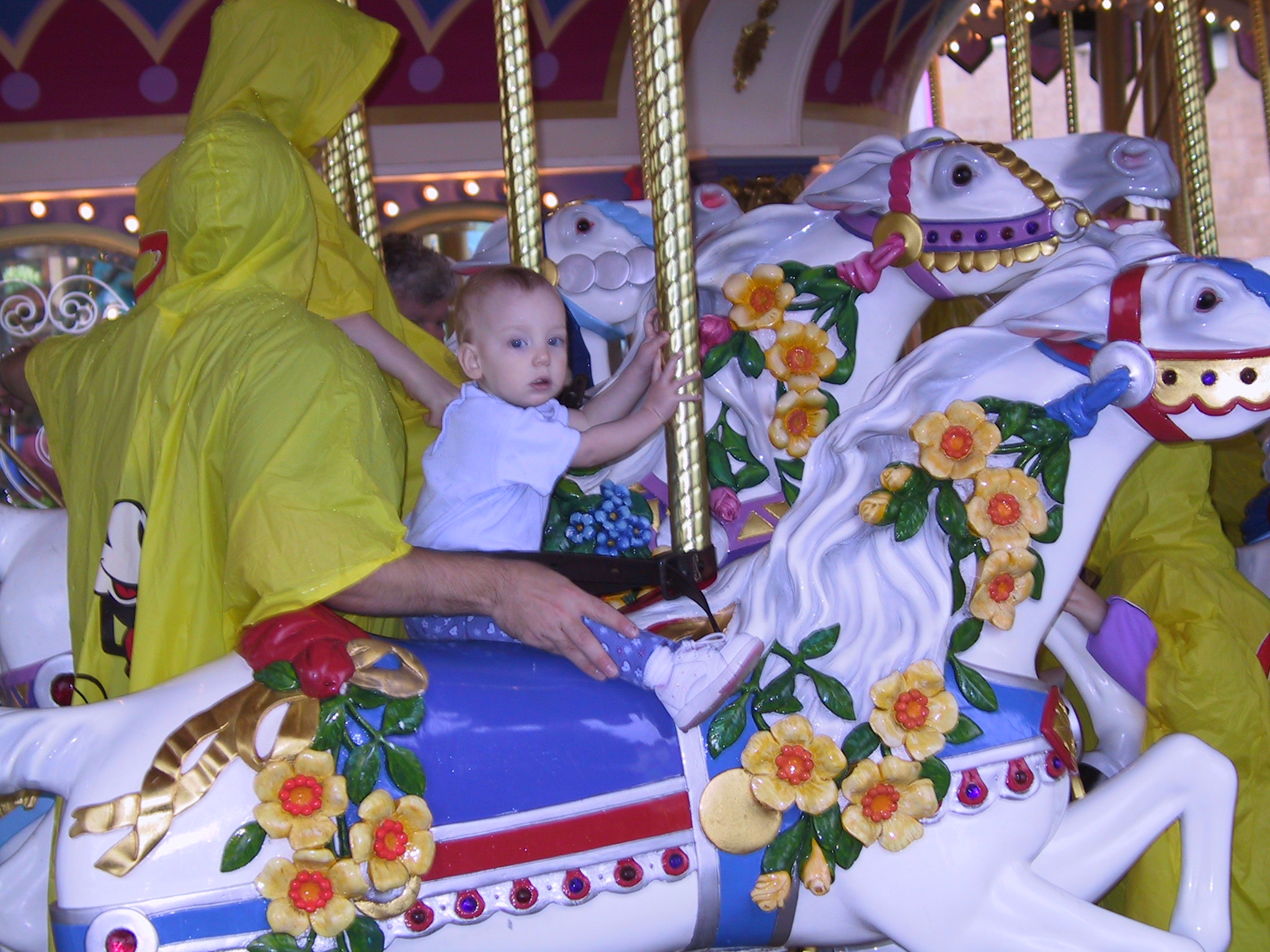 You can tell we had some rainy days there, but it was warm. We still had the rain “tent” for Opal’s stroller, so Opal could be nice and dry all the time, but she could still see what was going on. She loved the rides, too. 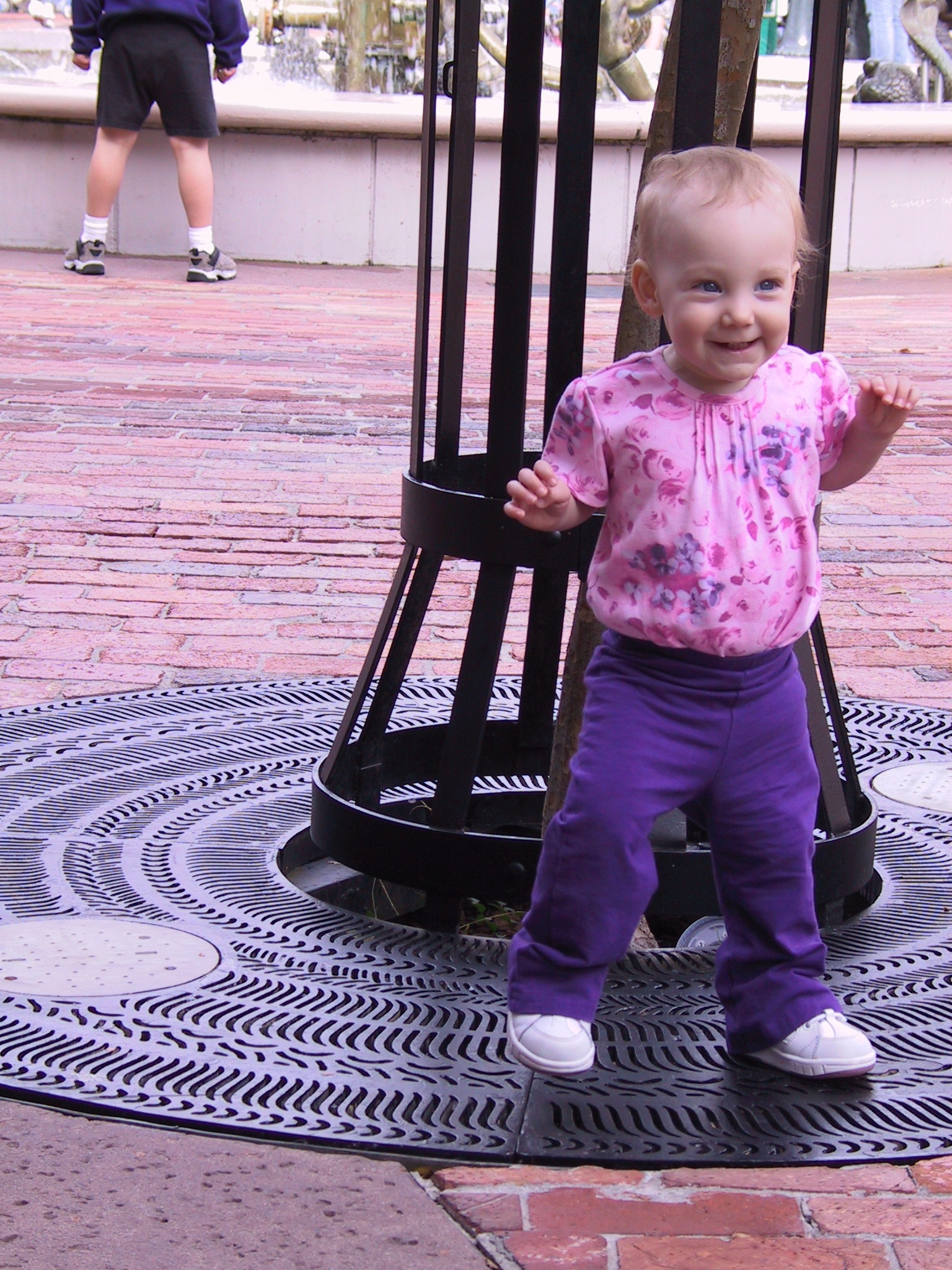 Sometimes Opal just enjoyed being there and dancing around. You can avoid characters if you want. 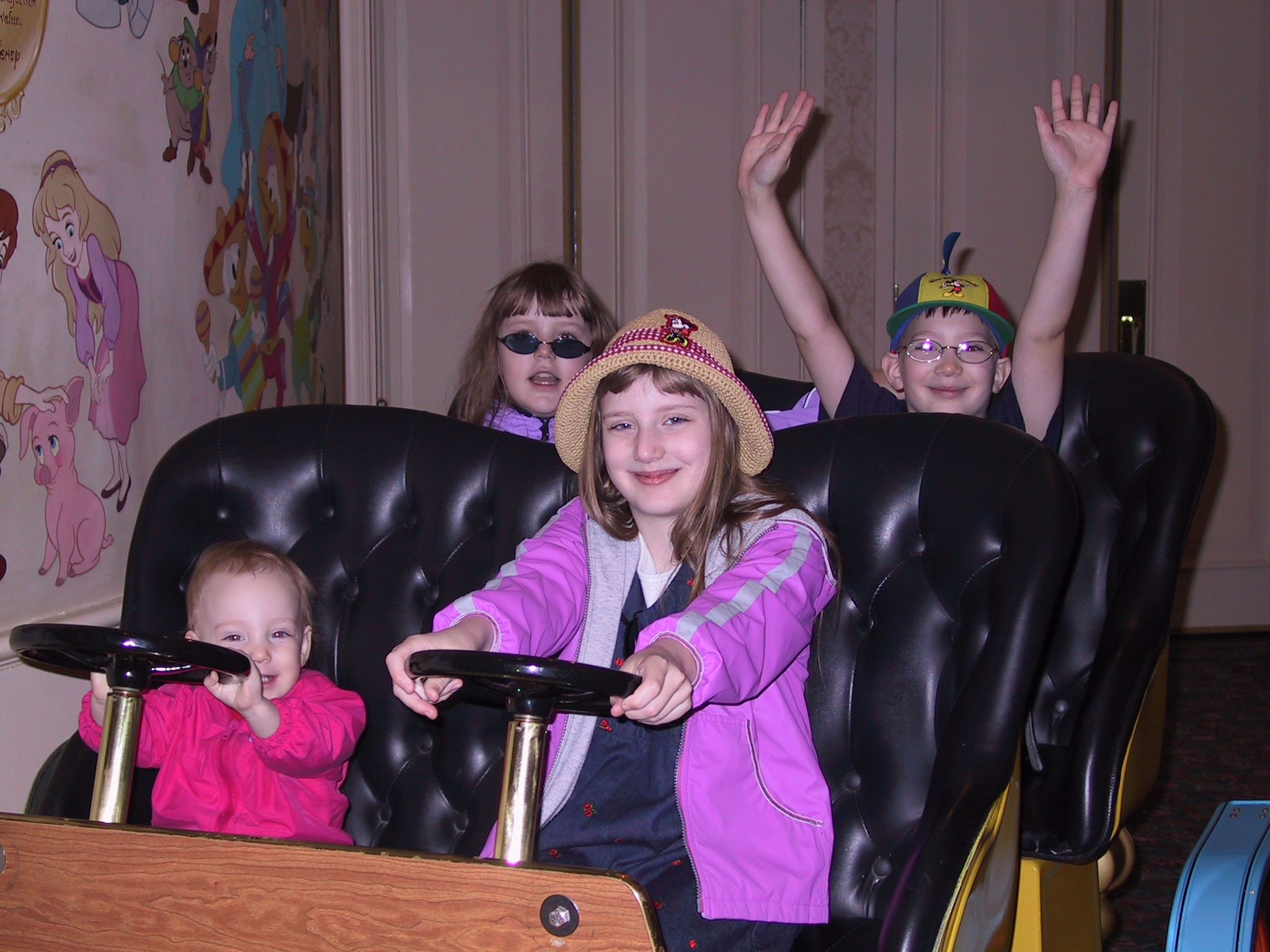 Skyla and Opal are “driving” while Nat and Hannah are in the back.

You can find this car, and other neat picture taking opportunities at the Magic Kingdom. You will need to go into the building with the camera center, and then go in the back. Sometimes you’ll find some characters there, too. 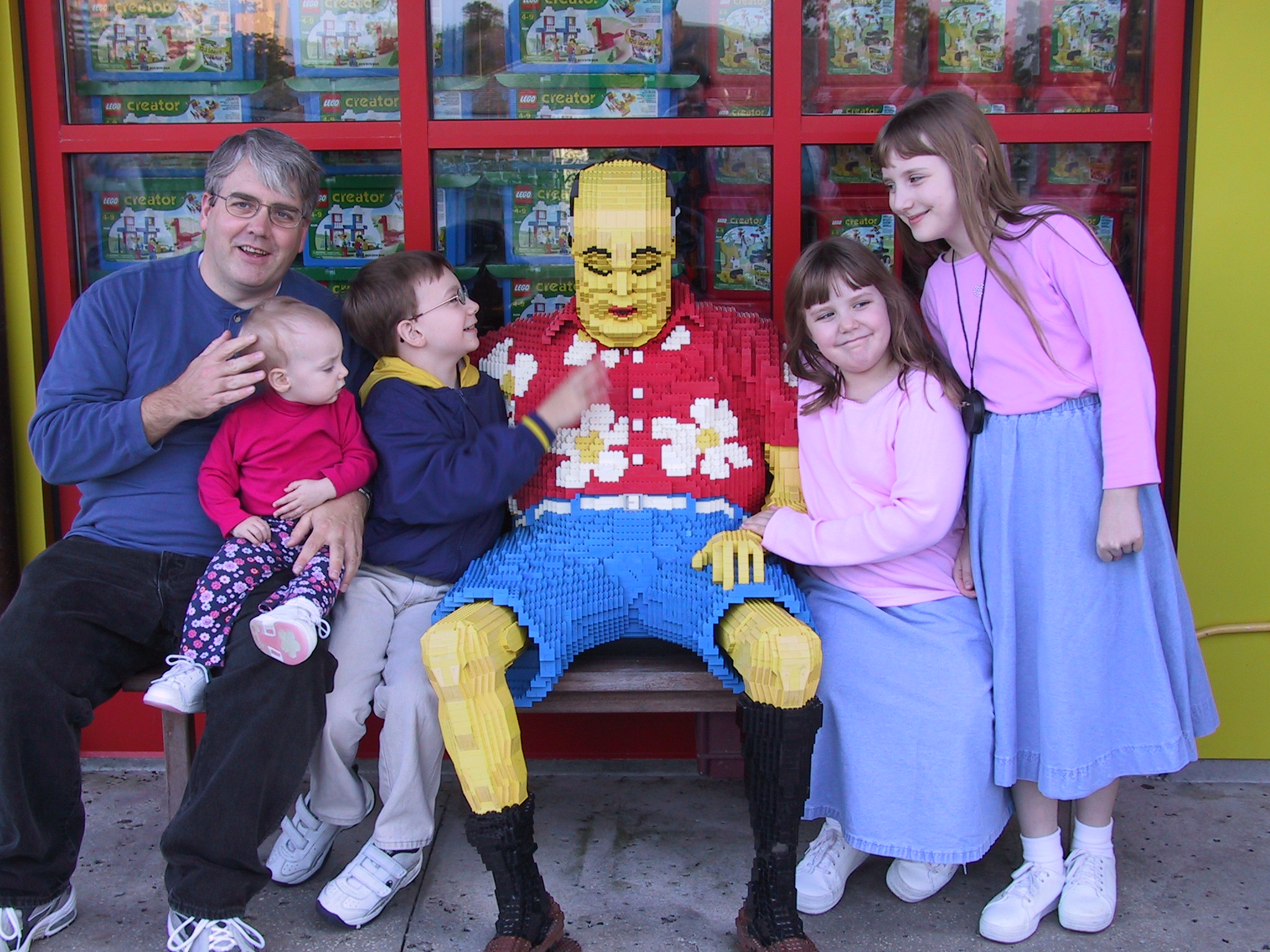 Here are Wayne and the children with the snoring “Lego man.” 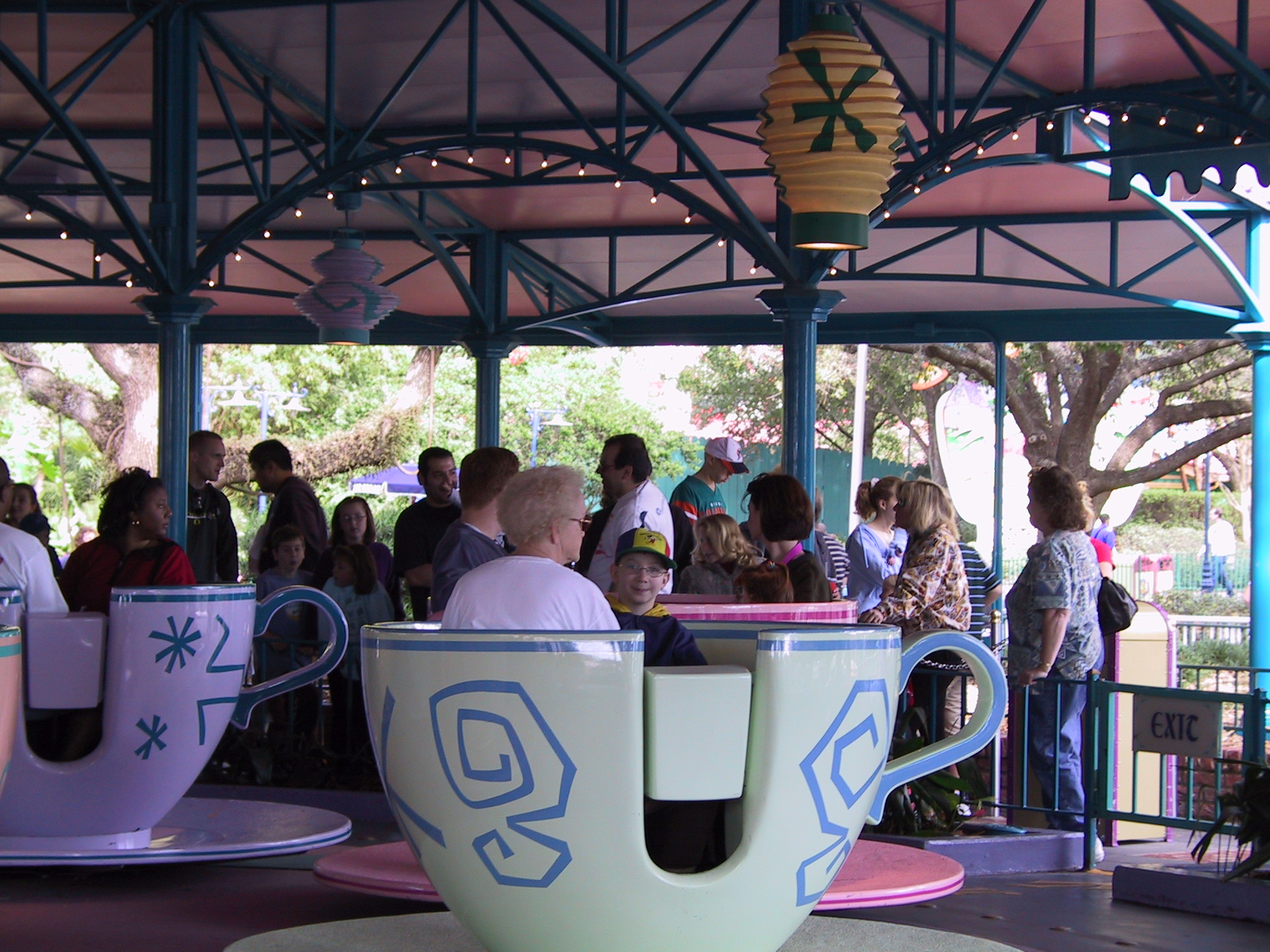 The “Mad Hatter’s Tea Party” is always a favorite. Here are Goldie and Nat getting ready to spin. Believe me, they really got it spinning!