Wayne and I took our first trip to Walt Disney World without children in February 2013. What can I say? We did just what we wanted, without caring what the children wanted to do. Since we’d been there a number of times already, we didn’t have to “do it all” while we were there. We did, however, do a lot more browsing through World Showcase at Epcot. We never did that before. 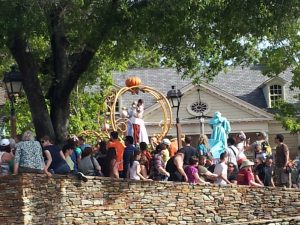 We were there for my birthday, and I met twins who had the same birthday I did. We rode the bus to one of the parks with them. They were turning ten that day.

If you go to the parks, they have buttons you can get for your anniversary, your birthday, or even if it is your first visit to Walt Disney World. If I had thought, I would have made buttons for Wayne and me that said, “First Time Without Children.” While we enjoy our trips with the children, it was a nice change of pace to go by ourselves.

So, if you think you can’t go unless you have children with you – think again!